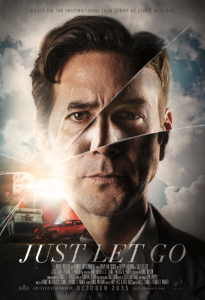 You can currently pre order Just Let Go DVD on Amazon and bring home what audiences have been calling “Breathtaking”, “Powerful”, and “Inspirational”.  Just Let Go was released in select theaters in October and was well-received by audiences and critics alike. You can still see the film in select theaters in Utah, Las Vegas, Arizona and Lethbridge, Canada. You can find a list of theaters here: http://www.justletgomovie.com/ The rest of us will soon have a chance to watch it at home.

Just Let Go tells the true story of Chris Williams’ quest to keep a commitment–to forgive the unthinkable. In 2007, Williams lost his wife, his unborn baby, his daughter, and a son in a traffic accident caused by a young drunk driver. As the perpetrator goes on trial, he finds himself facing the prospect of his own kind of life-sentence. But despite of the heaviness of his loss felt from within and without, he commits to do the remarkable– forgive the young man who took his family away.

Where do justice and mercy meet? What can forgiveness do? Just Let Go examines these questions against the backdrop of a courtroom drama. But it is in Williams’ relationships that the film explores these themes. How would you react to tragedy, and what can forgiveness do for you? Explore your own convictions as you watch Williams explore his.

As a feature film, Just Let Go was well-received. Deseret News and The Independent Critic lauded Henry Ian Cusik for his portrayal of Williams. According to The Independent Critic, Cusik is successful in maintaining the steely resolve and vulnerability that embodied Williams’ character.[1] Josh Terry of Deseret News described Cusik’s performance as charismatic, with troubled depth.[2] Audience reviewers on IMDB also praised the film as well-acted and inspirational.[3]

Williams is grateful for a film that he hopes will transform the lives of moviegoers in a way that his experience transformed him. He wants them to experience the same peace and freedom that he felt when he decided to forgive. Through efforts to promote peace and forgiveness he hopes to help others to let go and move forward.[4]

As we ponder the birth and life of Jesus Christ during this time of year, it is good to remember the power of forgiveness that he embodied. May you find peace and freedom in your own lives as you contemplate what forgiveness can do for others and for you.