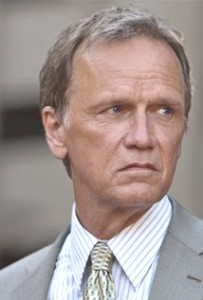 Actor/ Director/ Sam Hennings has worked in the film industry for more than 30 years, taking many roles in movies and in TV series. Hennings was born on December 17th, 1950 in Macon, Georgia and has lived mostly in Los Angeles, San Francisco, and New York City. He has a wide repertoire—appearing in science fiction, westerns, crime, war, and historical dramas, as well as other genres. He has also performed in many stage productions. At 65, he is still actively involved in film, recently finishing a screenplay, The Littlest Cowboy.[1]

Hennings is known for numerous TV roles and guest appearances. He acted in episodes of such series as: Star Trek: The Next Generation, Walker, Texas Ranger, E.R., CSI, JAG, Murder She Wrote, Alfred Hitchcock Presents, Saving Grace, and Memphis Beat.

Hennings has also appeared in many feature length films, beginning with the TV movie On Our Own. He co-starred with Leonardo DiCaprio in The Aviator; Anne Hathaway in Havoc; Jon Hamm in Stolen; Lea Thompson in Ten Tricks; Wesley Snipes in Drop Zone; and John Travolta in Shout.[2] Hennings is also well-remembered for his starring role as Benjamin Steed in The Work and the Glory: Pillar of Light, which he reprised for the two sequel films.