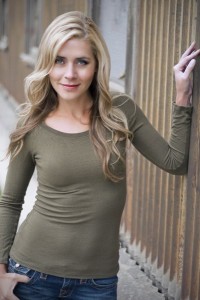 Accomplished actress/voice over artist, writer, communications specialist, and mother, Heather Beers is revered by moviegoers and marketing professionals alike.  Her starring roles in Charly (2002) and Baptists at Our Barbecue (2004) put her in the spotlight with LDS film aficionados.  She went on to star in many other films like Christmas for a Dollar (2013) and continues to act today, including her work in the forthcoming Waffle Street and The Hollow Point.  She and her husband also own Momentum Communications, a successful advertising and public relations firm.

Heather started her career in theater when she was very young. Perhaps influenced by her mother’s work as a community theater director, in her youth she received accolades for many theatrical roles. Her amateur credits include works such as The Egg and I, Music Man, and How to Succeed in Business Without Really Trying.  She went on to perform in Hamlet and The Stronger at Brigham Young University.

In addition to her work in theater, Heather started work in public relations, communications, and advertising early in life.  She graduated from the University in Utah with a degree in English, proceeded to work for a Salt Lake City-based advertising and PR agency and stayed on with them for five years.  She also continued as a freelance writer for publications such as Utah Business Magazine, Salt Lake Magazine, and Utah Style + Design.  Additionally, she has done copywriting for advertising agencies in Utah and California.

Heather is well-known for her excellent performances in films such Charly and for appearances in television shows, such as Warner Brothers’ Everwood and USA Networks’ Cover Me.  She also hosted BrideAccess, which aired on KSL and ABC4 for more than five years.  Additionally, she lent her voice to a number of radio and television advertising spots, as well as Amped 3, a video game on Microsoft’s Xbox.

Family life is very important to Heather; she enjoys spending time with her husband and boys. She also enjoys cooking and traveling.